You gotta love the Belgians

Posted by Mind:Style on May 8, 2006 in Golfpunk
Home on the range

At West Hove Golf Club they have a practice range that is, essentially, a field with some mats at one end. For three quid golfers get a bucket of old balls, a telling off if you wear jeans and a soaking if the weather turns nasty as somebody decided that you don’t need a roof in the sub-tropical climate of East Sussex.

Thankfully, standing in showers, slapping crappy range balls into the murky distance needn’t be the only way to fine tune your game and after the opening of the Golf In An Hour venue at London’s Northwick Park, comes plans for a revolutionary new practice facility in Belgium.

At the recent KPMG Golf Business Forum at Aphrodite Hills in Cyprus, Belgian creative collective Mind:Style unveiled their radical design for a new inner city driving range near their base in Antwerp and as Stan Colders, Mind:Style’s founder explains, it’s about as far removed from the archetypal driving range as one can imagine. “So many of today’s clubhouses, driving ranges and resorts look the same,” he says, “as if they have come off a production line.”

The Antwerp City Driving Range – the plans are currently with the city council – is perfectly in keeping with the company’s aim of creating ‘golf sanctuaries’ and while there are three tiers of bays on the range itself, there’s also cinema rooms, conference facilities, cocktail bars and restaurants. Perhaps the most inventive part of the complex, though, is the grass roof which doubles as an enormous practice putting greens.
West Hove Golf Club, it’s over to you… 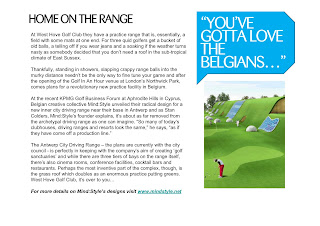